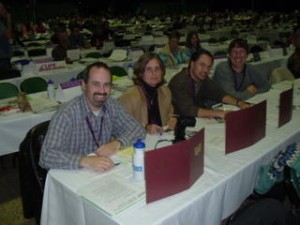 Have a look at the CUPE National web site to see what resolutions were passed today. They were all pretty much union motherhood issues—an emergency resolution supporting CanWest Global workers in Quebec City who are losing their jobs, calls to deny support to political parties who don’t have anti-scab legislation in their platforms, and constitutional resolutions cleaning up language in the CUPE National constitution.

The Big Issue of the DAY…

…was without a doubt the discussions on consitutional resolution C-27 (which will hit the floor tomorrow), and the strategic directions document which discusses barriers to women in our union. At present, only five of twenty-one members of the National Executive Board are women—worrisome when over 60% of CUPE members are female. This constitutional resolution will create five additional, temporary positions for women only to help address the gender imbalance for two years to give CUPE time to determine what barriers exist.

CUPE BC members met for a two-hour caucus to discuss the issue, and also to determine who would be chosen to represent BC in an election for one of the new positions should the resolution pass. I am pleased to say that Susan Zander, president of CUPE Metro, was elected. I am, however, doubtful that this resolution will achieve the 2/3 majority required to pass on the floor. Many of the “con” comments today were, in my opinion, thinly veiled sexism, and there are many people at the convention working hard to defeat this motion.

I know that our members understand the need to remove barriers for women, and to tackle male-dominated institutions head-on to create change.

Our delegation will be fully supporting C-27, and will lobby other delegates to do so as well. As a single dad I’ve had only a small sampling of the many obstacles that exist for women to fully participate in the union—lack of childcare, lack of pay equity, lack of parental benefits, and the like, that need to be addressed more aggressively at the national level.

I would like to thank Laura for attending all of the women’s caucuses (including one at 8 am this morning (that’s 6 am Vancouver time, thank you very much!)). Look for an article from her on this and other issues in the next Off the Shelf.

…is Bill 12, which denies BC teachers the right to collectively bargain. An emergency resolution will go forward tomorrow, which if passed, will commit us to support the teachers, including joining them in a general strike.

Why should we care what happens to teachers?

Because we are also bargaining next year. Remember the Olympics? Well, they’ve started already. Planning is underway. Building permits are needed. Workers are needed. Municipal and provincial governments are going to want to ensure that there is absolutely no labour unrest for the next five years. But, they also have to save money, which is why they are legislating the teachers back to work (before they’ve even walked off the job) and forcing them to accept 0% wage increases for two years.

If they can do it to them, they can do it to us. There will be huge pressure on all city employees to sign a four-year contract next year, to carry civic employees through 2010 so that the Olympics will not be disrupted. We need to see significant gains in our contract – compared to the cost of living, we haven’t kept pace in the last ten years. If we don’t get concessions and improvements in our agreement, we face a scenario where all city workers could be legislated to work in the interests of the Olympics.

If we don’t take the stand that should have been taken when the HEU’s contracts were torn up by the Liberals, then we potentially face a loss of our own right to bargain collectively and strike for fair wages and working conditions. For the sake of a letter writing campaign, solidarity pickets, and maybe a day without pay on a picket line, we could be saving ourselves thousands of dollars in future wages and benefits.

We’re keeping in close contact with the CUPE BC executive here, who are liaising with the BCTF. Watch for more information soon. 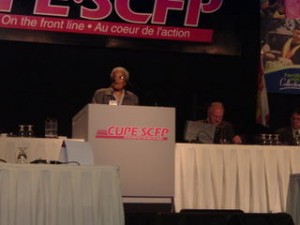 The keynote speaker of the day was Dr. Linda Rae Murray, a health and safety activist from the U.S. She spoke passionately about the value of trade unions as instruments of social justice, and lamented the direction America has gone (only 11% of Americans belong to a union, compared to 30% of Canadians). She talked about the structural racism that comes to the surface in times of disaster like hurricane Katrina, and how it spoke to her as an African American. She also talked about unions as the antithesis of the neo-conservative—unions are about community and social responsibility. Conservatism is about individual responsibility and self-reliance to the detriment of the community. My favourite quote?

“If you just watch what the United States is doing and do the opposite, you’ll be okay, Canada.”