This convention business is hard work. After doing my preparation for today I only got about four hours’ sleep last night. Gerard, Laura and I are all very tired. It’s exhilirating, but very, very busy.

So, what was up today? Mostly speeches. You get so caught up in everything that’s going on that it all seems significant. Now that I’m back in my hotel room, I’m trying to filter out stuff that people in our Local back home may not find so interesting.

First off—we don’t have internet access on the convention floor. There is wireless for a fee, but it’s provided by Telus. I addressed the convention in the afternoon (around 3:00 I think—you can see the rough transcript at the CUPE National website), and got a nice round of applause for our local’s support of the TWU and CMG. I asked delegates not to use the wireless service in recognition of the TWU. I don’t think anybody is.

What this means is that you will get updates in the evening rather than ongoing throughout the day. What this also means is that I don’t have to carry a laptop around all day. (My spine says “hooray!”).

A breakdown of the issues of the day…

Women’s issues: Laura attended the women’s caucus over her lunch break. There is a push to approve a resolution that would see temporary positions created for women on the National Executive Board, and to see systemic barriers to female participation in CUPE removed. We will be vigorously supporting this resolution when it comes to the floor.

The BCTF situation: There was an emergency caucus after the convention adjourned after Barry O’Neill, President of CUPE BC, addressed the convention to let members know that the Gordon Campbell government today introduced Bill 12 that effectively strips teachers of their right to strike. BC will introduce an emergency resolution, probably tomorrow afternoon, to seek support for the teachers. This has huge, huge implications for us, especially considering we are going into bargaining next year and we have a government that has a track record of imposing agreements with no wage increases or even rollbacks, and ripping up contracts. I will update you on events around this tomorrow.

Out of four resolutions introduced today, all four were “concurrent” (see my previous post) and were approved by the members. The first three dealt with lobbying for improvements to welfare, EI, and the establishment of a minimum wage of at least $10.00/hr across the country. The last motion asked us to take a tougher stand with the Canadian Labour Congress, to prevent infighting and raids between unions, and to take more action against privatization and contracting out.

…and what about the speeches?

Paul Moist, National President (at podium in photo) urged members to stand with other workers who are under attack. “We must use our time to speak to all employers, the public, and members of government to continue to defend public services.” Claude Generaux, National Secretary Treasurer, (the man sitting to the left of the podium), reported that CUPE’s finances are in the best shape in over 25 years. This is probably the first convention where there will be no significant debate on money issues. 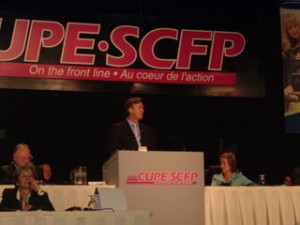 Manitoba Premier Gary Doer spoke on his NDP government’s commitment to workers and to health care issues. He was, however, challenged by many delegates over his government’s handling of contracting out of childcare work in Manitoba, and his government’s reluctance to repeal essential service legislation, and did not return to the podium to address those issues.

(…note the good seats we have…this convention is huge, and we are fortunate to be front and centre. I didn’t have to leave my chair for these photos).

Some other photos for you…

Me with Randi – my favourite Early Childhood Educator, an activist on behalf of everyone who works with children, and a colleague from Britannia. 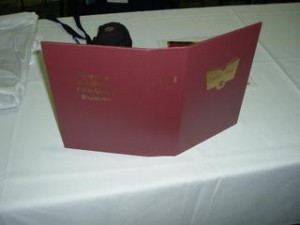 One of the placemarkers Bindery made for us. 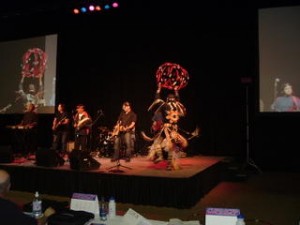