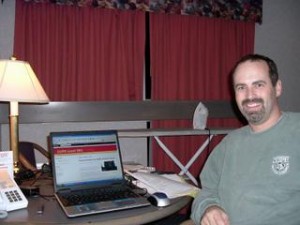 …back at the hotel after the BC Caucus and a dinner meeting with Laura and our National Rep. (Hi, Bren! Hi, Teresa!)

Laura and I just returned from the raucus BC caucus. Not all of the BC delegates have arrived yet, due to flight delays (I hear it’s raining back home!). When they do, we will be a contingent of about three hundred.

A big point of contention is the issue of how resolutions are debated at the national level. Conventions are handled differently than our local meetings, in that rules of order are greatly modified.

Perhaps the most mystifying thing about attending a CUPE convention is what is meant by “concurrence” and “non-concurrence.” At the CUPE BC convention, resolutions are forwarded months prior to convention by locals. They are considered by resolutions committees, who take them forward to convention with a recommendation of “concurrence” (which means that the resolution is not violating any CUPE rules and can be freely debated and voted on) or “non-concurrence” (which means that if you vote in favour, you are killing the resolution. If you defeat it, it just disappears. It can never, in any incarnation, be adopted—the reasoning being that adoption would violate a fundamental CUPE constitutional provisions or the like).

There is a grave problem at the national level. Small committees take our resolutions, and very often for no compelling reason bring them to the convention floor moving non-concurrence—in effect killing the democratic process. For example—we learned tonight that every resolution regarding constitutional amendments coming out of BC except for one will be going forward as non-concurrent! When the two committee representatives were asked for specific reasons on an item by item basis, the reasons given were “…we felt it was too expensive,” or “…we thought that what is in place is sufficient for the membership.”

I thought this was our union! If I’d wanted someone to do my thinking for me, I would have competed on Canadian Idol.

This is shocking! CUPE BC has submitted a resolution to limit the power of committees in a matter consistent with the current practice in our province, so that issues can be freely debated. Guess what? It is going forward as non-concurrent!

So what do we do? BC delegates are working at the grassroots level here, liaising with other provinces. Our only hope is to create enough of an uproar over this that when it hits the convention floor the National Executive and the committees get an earful. Then, someone needs to “move referral” before a vote is taken.

“Referral” is the only way to save a resolution that has been moved as non-concurrent. If the delegates vote in favour of referral, the resolution is sent back to committee to be re-drafted, and time permitting, re-introduced with a recommendation of concurrence.

There are many important issues to be debated in the days ahead. Laura will be involved in the women’s caucus, as CUPE looks to break down barriers. The four of us are working hard studying the resolutions and liaising with delegates. Tune in regularly for updates. If you want to see the resolutions I’m talking about, see the CUPE National site.