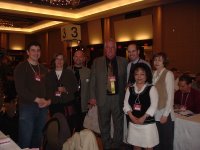 Our delegation, with CUPE BC President Barry O’Neill.

Some impressions of the first full-day of Convention…

People seem fatigued (or is it just me?). We got through a massive number of resolutions, with very little debate. Perhaps this is because it is not an election year (every second convention sees elections for all executive positions), and people aren’t jockeying for position at the microphones.

The most contentious resolution was a proposed constitutional amendment coming from CUPE Metro (Vancouver and area District Council to which 391 is affiliated), that proposed raising the number of Regional Vice-President positions for Metro Vancouver from three to four out of ten positions. The argument for this amendment is purely proportional. There has been an increase in the number of CUPE members in the Lower Mainland over the past several years, so that 46% of CUPE members in British Columbia are now affiliates of Metro.

Many took exception to what some characterized a “power grab” by the Lower Mainland. Brother Larry Bancroft from the Interior went so far as to liken it to the BC Liberal party’s “attacks” on the “hinterland.” Ken Davidson of 1004 tried to cool things down by presenting this as an issue of pure numbers…with 46% of members, there is a lot of work to be done, and workload for only three RVPs is an issue.

When it came to a vote, the room split purely on regional lines. It’s clear that there will be no movement to evolve the executive structure in the near future unless there can be a better understanding between regions about the challenges each faces.

Peter and I both spoke today. I addressed a resolution opposing the repurposing and regionalization of school boards, letting the delegates know that public libraries now are administered under the Ministry of Education and could face a similar fate. (I also let the delegates know that our local is 75 this year, and that all but one of our members participated in the day of action in October).

Peter addressed a resolution asking for David Emerson to step down. “As a library worker, I soak up new vocabulary almost by osmosis…I can feel it expanding every day. But when I think of David Emerson, the only word I can think of is ‘bullshit.’”

Peter also sat on the podium as part of the Committee Against Racism and Discrimination (CARD), and delivered the portion of the report on Gay, Lesbian, Bi and Transgender issues (while sporting a pink triangle temporary tattoo on his cheek). It’s hard to describe how much Peter does in unique ways to raise the profile of our Local. He’s known and respected by almost everyone in the union movement, and like he does at VPL, he lightens everyone’s mood and gets more done than is humanly possible. Peter, you are truly fantabulous and starrific!

Guest speakers today included Carole James (leader of the provincial NDP—Lily, Jennifer and Laura caught up with Carole in the washroom…I swear, that’s where most of the business gets done at convention!), and Jinny Sims (president of the BCTF). Jack Layton is scheduled to speak tomorrow…I’ll do my best to time my bathroom break accordingly to get a word in with him.

We’ll try and update the blog tomorrow night. I’m off to bed to try and catch up on some rest, so that I will be fresh for the International Day of Mourning march at 7:30 am.

But before I go…I have to put a plug in for childcare! Randi Gurholt-Seary from Local 15 has been working tirelessly to get the Conservatives to honour the Liberal childcare strategy. Show your support by clicking here and adding your name to the petition.

And now a word from Peter DeGroot…

The Workers Day of Mourning is happening on Friday (tomorrow) April 28. CUPE BC will be joining the BC Federation of Labour for a rally in the early hours of the day. You are welcome to attend and participate!

The gathering will be at the Art Gallery (Georgia Street side) at 7:45. People attending will be asked to carry one of the 188 caskets. Each casket symbolizing the 188 workers who died on the job in British Columbia in the past year.

We are fortunate in the Library where we have a lower rate of injury than other professions. We have policies and guidelines and a very active Occupational Health and Safety Committee. Not all workers are so fortunate. Here’s an opportunity to show some solidarity with other unions to draw attention to this most important matter.

The rally should last about an hour (enough time to get back to your worksite!)