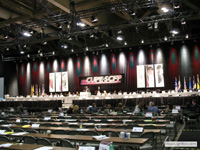 Randy: We showed up bright and early for the mad dash to claim seats in the convention hall. Walking into that hall for the first time made me aware of just how much support we have behind us – it’s huge, and it was soon packed full of delegates from every corner of the country. But not before we attended the new delegates briefing, where we learned all about concurrence and non-concurrence. And we thought we used too much jargon.

The convention then opened with greetings from Sid Ryan, president of CUPE Ontario and general vice-president of CUPE National, from Aboriginal Elder JoAnne Kakekayash and then from guest speaker and mayor of Toronto David Miller. Our president, Paul Moist, delivered his report to us and assured us that our union continues to be the best damn union ever. Alex, always ready to go to bat for us, used brother Moist’s speech to take the opportunity to thank him and all of CUPE for their support during our strike.

Then we broke for lunch. Aili, Inder and Alex went to the Women’s Caucus and I went out and found a restaurant that serves half-price pints at lunch. As you will see, equality is a big topic at this year’s conference and I learned my first lesson about it at lunch. If you’re a woman at national conference, you experience a serious inequity in the amount of free time you have to sneak out for a beer or a snack: women’s caucuses at noon on the first day, and 8:00 AM every day after. Something oughta be done about it!

Business resumed after lunch with the awarding of the Health and Safety award. Our secretary-treasurer, Claude Genereux then delivered his report and assured us that we continue to be the best damn-funded union ever. For anyone worried about our strike pay running out, brother Genereux’s speech would have reassured you no end. Not only are our finances strong, but we are doing well enough to create some new funds to finance campaigns on the issues that are important to our workers, and especially to fight privatization and contracting out.

The afternoon progressed to debate and voting on several resolutions, before we closed with an election forum and heard from candidates running for election to the national executive.

But the fun didn’t stop there. Oh no, Because of course, at convention, there are caucuses! and forums! and events! And if you want to spend 14 or 15 hours straight of your day at convention, by god you can. And so, on day one we nearly did. When convention broke at 6:00, Aili and I headed to the youth forum, while Inder attended the rainbow forum and Alex nipped over to Costco to purchase a digital camera for our local so that we can document convention and everything else we’re doing back in Vancouver..

This was followed by the District councils meeting, which Inder and Alex attended and finally the equality forum, where we enjoyed a performance by Turtle Gals, an Aboriginal women’s theatre troupe. Finally, around 10 PM, we headed back to our hotel, some of us having been at convention almost a full fourteen hours without break.