Randy: Convention started to settle into a steadier rhythm at this point. The literacy award was given out this morning. And elections continued with the election of regional and diversity vice-presidents and trustees. Nancy Rich, BEST DAMN CHIEF ELECTION OFFICER EVER, continued to lead us through this process with great humour and élan. And we actually had an election! One position was actually contested! We actually got to fill out a ballot! It was for a trustee position. Otherwise, everyone was acclaimed. Brother Barry O’Neill was re-elected as General Vice-President, and BC’s own Maria Wahl was elected to one of the Trustee positions.

After lunch the National Disability Rights Activism Award was given out, and then it was off to the races 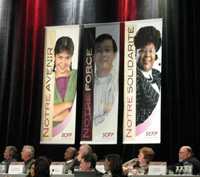 with a veritable parade of resolutions, or what I like to call a ‘pan-resolution-icon’.
However we didn’t get through nearly as many resolutions as we would have liked. For the second day in a row, this time due to an en-masse walkout by delegates from Ontario after one of the votes, we lost quorum. This naturally caused a great deal of outcry among those delegates, like us, who take convention seriously, and were still there ready to do business until 6:00. Clearly our president, Brother Moist was also very disappointed by this, and addressed it to the delegates remaining.

I’m now back at the hotel, and this will likely be the one and only blog post this convention, as we will all be leaving early tomorrow to fly back for the vote. We love you and miss you all, and can’t wait to be with you tomorrow for what will no doubt be a very important day for our local.