CUPE 391 starts the show!
And gosh darn, how fantastic that even before President Paul Moist’s gavel hit the podium, CUPE 391 was front and centre. The 1,500 delegates from across the country were treated to two of David Philip’s videos. Both videos received thunderous applause from the delegates, and both videos are available on line if you haven’t seen them (and I recommend that you do as they feature many 391 members) 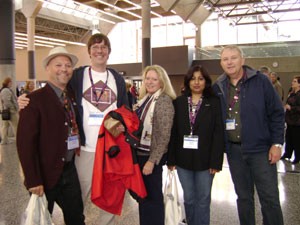 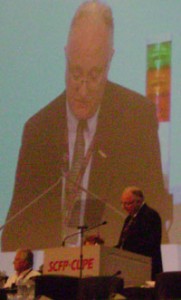 President Paul Moist raised three primary focuses that CUPE will be addressing over the upcoming years. Each has equal importance for all workers across the country.
1. Collective Bargaining. The ability to push for improved rights, and maintain exisiting rights is fundamental to the trade union movement. CUPE will continue to strive to raise standards for everyone.

2. Pensions. Does an economic downturn necessitate that nobody deserves a pension??!! Absolutely not! Everyone deserves a good quality of life, through their life. Pensions are becoming unfortunately, a thing of luxury.employment status, deserve pensions. Watch for more work on this.

3. Anti-Privatization. We need to stop the relentless pressure to privatize. At CUPE 391, we want our name to always be associated with Vancouver Public Library and Gibsons Public Library.

Of course CUPE will be dealing with far more issues than these in the coming years. With a union with more than 600,000 members, the challenges can be ably addressed, and the activists will be called on. A key group of these activists are the shop stewards. CUPE has declared 2010 to be the year of the Steward. Be on the watch for interesting opportunities for the Stewards in the coming months.

A heroic tale from the sisters and brothers of the CUPE Local with Can-Jet brought tears to delegates. “Know that every flight attendant who you see serving coffee is a trained professional is all aspects of safety, who will do everything to get you home. They are ready to be your heroes.”

Another hero at the Convention was HEU BC’s Kathryn Peterson. She won the CUPE award recognizing people with Disabilities.

The Arts come to Convention

Actually this is a long standing tradition of CUPE. Artists come to the convention floor during the “down time” (I say that as the activities usually run for 16 hours per day). We were fortunate to have local musicians, poets and singers present. Their belief in social justice mirror’s CUPE’s and their discourse always elevates the conversations. Each day has different artists scheduled who will undoubtly elevate the spirits and souls of delegates.

Both Inder and Peter will be spending time at the information booths that provide the latest material for delegates. Today they spent time at the CUPE BC booth, and the the Equality booth.

Constitutional Changes
The delegates get to debate various issues on the floor. A two thirds majority is required to make a change. One change of note in the national constitution is that it now free to join! The token $1.00 has been removed from when a new member (or organization) joins CUPE. Said Secretary-Treasurer Claude Genereaux, “We’re finally free of the welcoming tax!”

Election Forum
The day on the convention floor concluded with the Election Forum.  Anyone seeking a position within the National Executive Board was welcome to share their platform.  After the speeches, 391 delegates met with BC candidates, Barry O’Neill, Mark Hancock, and Colin Pawson. 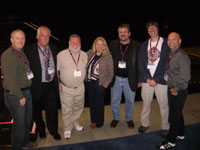 Tomorrow is Pink Triangle Caucus, Resolutions, Constitutional Changes and probably a lot more. Thanks for checking in today, and we’ll see you tomorrow!