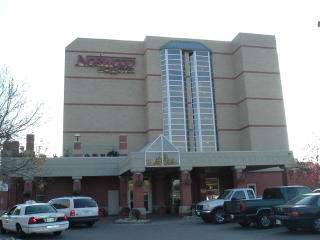 First off, here’s where we’re staying…

It’s comfy, has a noisy bar with a Rolling Stones look-alike band, and a place where you can get a greasy breakfast and union-strength coffee.

After a breakfast meeting where we discussed our plans for the day, we walked to the Convention Centre this morning (it’s really mild here—no jackets needed!) which is over the Red River (birthplace of the famous cereal). It’s about a twenty minute hike.

First order of business today was the Library Workers’ caucus. This is a chance for us to share pressing library issues at VPL and in BC with the rest of the country, and to hear what work is being done elsewhere. Gerard and I both took turns speaking to issues. 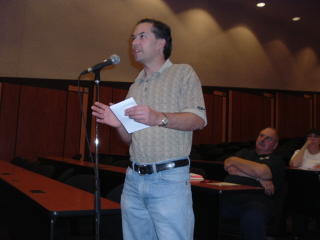 Gerard spoke eloquently about the impact of new technologies on circulation staff, citing self-service checkout as an example, and addressing the potential future of RFID. One of his quotes that struck me was his reference to Seattle Public: “Workers have moved from serving the needs of the public to serving the needs of machines.”

I addressed the group on a variety of topics. Under challenges we are facing, I highlighted workload and RSI issues, pay equity, the downloading of social services from the Provincial government, the need for improved working conditions for part-time and auxiliary staff, and the loss of subject specialty and devaluing of professional skills.

Under our successes I let the attendees know about our Wellness Committee initiative, our recent discussions at the Board strategic planning session on language around workplace intellectual freedom and staff workload issues, the SSP review that management has been instructed to undertake, and the positive relationship we’ve been able to cultivate with our Board over the last several years.

Items of interest from other libraries…

Joy McMann from the City of Winnipeg reported that in the new Millennium Library (I’ll go have a look at it later this week), there has been a huge service shift—management has decided that the public needs subject-specific desks on each floor (!) So, instead of SSP they are dealing with MSP—multiple service points. And staff are being required to become specialists rather than generalists. Go figure.

Donna Holmes from Regina Public Library reported on the crisis of 2003, when the library announced an unexpected funding shortfall of $1,000,000.00. Without public consultation, they announced the closure of three branches and the layoff of twenty-seven staff. CUPE helped support a campaign that mobilized the city—a petition signed by 26,000 people moved City Council to fire the library director. Half the Board resigned. There were no closures.

Almost all libraries reported increased workloads without increased funding for staff. The big issues remain pay equity, health and safety, the use of volunteers, and the need to help non-unionized libraries to become organized.