Randy: After our marathon Monday, we showed up at Convention on Tuesday prepared to take it a little easier. The day began with a Women’s Caucus (surprise!), which some of our number attended. We were also invited to the communicators breakfast that morning, as we would be receiving a communication award later in the day, so I attended that.

At the communicators breakfast we received our prize for the award: a CUPE backpack. Chris – see me about the backpack when I get back. Meanwhile, the rest of the delegates and I will work at filling it with all of Van Halen’s rejected brown M & Ms before we return. 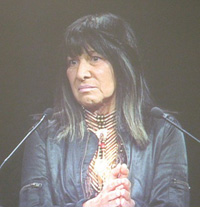 Convention business then resumed at 9:00 AM. A bunch of stuff happened and then we heard from the BEST DAMN GUEST SPEAKER EVER! Buffy Sainte-Marie! She rocks! We all love her! Her speech covered a number of topics, and she even treated us to an a capella rendition of a song from her forthcoming album. She’s so cool!

Convention then broke for lunch. I returned a little bit early to go up on stage and stand in for Chris to receive our communication award for Most Frequently Updated Website. Further proof that CUPE 391 is the BEST DAMN LOCAL EVER!

Part of Tuesday afternoon was given over to one of the most important pieces of business of the convention: presentation of the National Women’s Task Force report. This report emerged out of a resolution passed at the last convention. It addresses the significant drop in the status of women in our union, as signified by the incredible downturn in the presence of women in leadership roles on our national executive board. This number has been going steadily down since the mid ‘90s and is currently at its lowest point since the early ‘70s, despite the fact that the proportion of women in our union has always risen and is currently at 2/3 of our entire membership. Currently our national executive is 13% women, while our membership is currently 67% women – that’s a gap of more than 50%! As you can imagine, this report was of particular interest to our delegation and we were keen to see it received, which it was. This, however was just the beginning of the work of the Women’s Task Force at convention, their report spawned a number of resolutions that would come before us over the next days.

Convention broke at 6 PM and unlike Monday night it was a much less active evening. Alex and I attended a quick BC caucus meeting, while Inder attended the Workers of Colour VP selection and the Health and Safety Forum. Then we all retired for the evening to try and heal our various illnesses (all except Inder who’s remained healthy throughout convention).